P1) If Toronto wins, Raptors owner Larry Tanenbaum is on record as stating that he plans to take the team to Israel

P2) Given Tanenbaum’s role in pro-Israel lobbying & advocacy (he founded the fanatically pro-Israel “Center for Israel and Jewish Affairs”), it is fair to assume that the purpose of the trip is to normalize Israel via sports

P3) Going on a trip to Israel whose purpose is to normalize is an act of normalization under any circumstance (i.e. waiving Palestinian flags on the trip does not make it a non-normalizing act)

C1) If the Raptors win, Israel will be normalized via sports

P5) I don’t want Israel to be normalized via sports

C2) I should cheer against Toronto

C3) I should cheer for Golden State.

Also, Drake. You should always cheer against Drake.

My latest article has been published at Mondoweiss 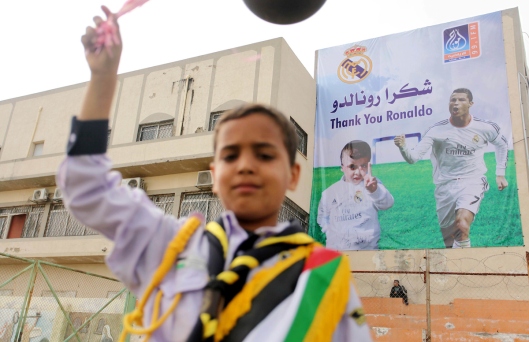 Poster of Real Madrid footballer Cristiano Ronaldo and Palestinian Ahmed Dawabsha, 5, who met in Spain in 2016 one year after Dawabsha survived an arson attack on his West Bank home in Duma, in which both of his parents and infant brother were killed by Israeli extremists. Yarmouk Stadium, Gaza City, March 27, 2016. (Photo: Ashraf Amra)

“Nicolas Sawaya looks at how a fake story about Cristiano Ronaldo donating €1.5 million to Palestinians for Ramadan spread” – Mondoweiss