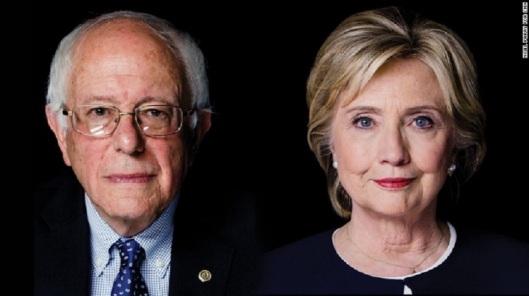 A few notes worth mentioning:

Analysis of Actuals vs. Projections:

The model did really well in its projections of Wisconsin, Wyoming and New York. Cumulatively, Clinton won 184 delegates vs. Sanders’ 163 delegates. The model predicted exactly those cumulative numbers for a delta of 0. Still, overall, the model had projected a lead of 413 pledged delegates for Clinton at this point, for a 57.8% vs. 42.2% Clinton lead, so the model is still clearly over-projecting in favor of Clinton (by +3.2%). That overshoot can be largely attributed to Sanders exceeding expectations during his caucus run over the past month. Final model projections are +584 pledged delegates and a 57.2% vs. 42.8% win for Clinton. As a result of the retroactive changes in delegates before March 1st (Georgia and Nevada), the projected delegate delta went down from 590 to 584. Projections were developed right after Super Tuesday on March 1st. See here.

Fig 2. The graph shows (off the left-hand axis) the delegates won or lost by Clinton after each primary (blue bars mean Clinton won the state; red means Sanders won); the size of the bars reflect the difference in delegates won or lost for each state. The bars are staggered in “water-fall” fashion to reflect Clinton’s actual total delegate lead, which is compared against model projections of Clinton’s delegate lead (black dots). The graph also tracks (off the right-hand axis) actual delegate % won for Clinton (blue line) vs. Sanders (red line), and compares against model projected % for Clinton (blue dots) vs. Sanders (red dots) 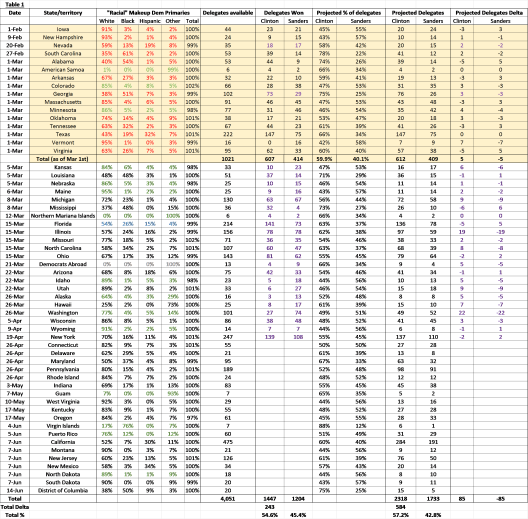 The expectation is for Sanders to continue losing ground in the next 5 states that vote on the 26th of April. I expect Connecticut and Rhode Island to be close, and Maryland and Delaware to be big victories for Clinton. Pennsylvania is an interesting one, in the sense that I expect it to be closer than what most polls are predicting, but I still expect Clinton to win it. All 5 states are primaries, and with the exception of Rhode Island, all of them are closed primaries (Rhode Island is semi-closed). As such, I expect Clinton to slightly outperform her demographic projections. Next update after the 26th of April round of primaries.