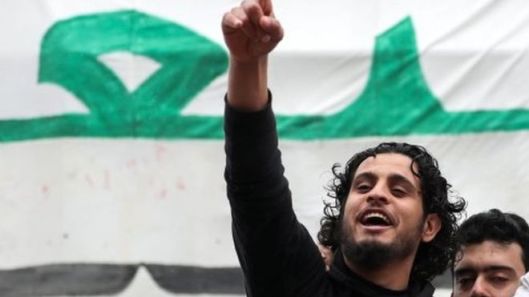 Over the past 24 hours, I’ve seen countless tributes to Abdel-Baset Sarout on social media and several pieces penned in his honor in various English-media outlets after he was killed in action by regime forces. Although I understand why many people feel the urge to honor his memory and why many of the tributes are laudatory in nature harking back to the early days of the Syrian uprising, I have to say that downplaying or passing over in silence his extremist and sectarian views as the Syrian uprising progressed into full blown-war is somewhat disturbing as the impression one is left with is that these things were “minor” and “no big deal” (and it frankly provides critics with low-hanging fruit to tar the entire uprising when a controversial figure like Sarout is lionized without serious reservation).

On the other hand, the commentary from the pro-Assad side unsurprisingly focuses exclusively on those later extremist views and also gets some important details wrong. Furthermore, his role in the early days of the uprising is completely ignored, and the context of his radicalization is absent.

The truth is that his life and his evolution are far more complex than what is being portrayed, and in the interest of fairness and completeness, I want to highlight both the good and the bad of Abdel-Baset Sarout.

This piece from the Guardian is rather typical of what I’ve seen being posted on the opposition side (all true, but essentially highlighting only the good):

“A Syrian footballer who became a symbolic figure in the rebellion against the country’s president, Bashar al-Assad, has died of wounds suffered in a battle with government forces.

Abdul Baset al-Sarout, 27, who rose to fame as a goalkeeper for his home city of Homs, joined peaceful protests against Assad in 2011 and was known as the “singer of the revolution”. He later took up arms as the country slid into civil war. Four of his brothers and his father have also been killed in the fighting.

Sarout’s life and his role in Syria’s uprising and conflict was the subject of Return to Homs, a documentary film that won an award at the 2014 Sundance film festival”.

Here are other pieces published in Al-Jazeera, The National and Haaretz) that say more or less the same thing.

There’s no doubt that Sarout was an early revolutionary who galvanized the protest movement in his hometown of Homs. He was a famous football goaltender for the (under 17 and then under 20) Syrian national team who gave up a life of comfort and fame to join and then lead the protests in Homs at the age of 19. By virtue of his singing, his charisma and his uncompromising opposition to Assad, he quickly became an icon in the early days of the Syrian uprising. Here is a good example to give you a feel for the atmosphere in those days, with Sarout leading the chants and the singing (Feb 2012).

There’s also no doubt that he personally suffered at the hands of the regime, losing multiple family members as Assad cracked down on the protests and bombed Homs to rubble. Surely this played into his transformation from non-violent protester to rebel leader, and I recommend you watch Return to Homs to get a better feel for his evolution.

Having said that, Sarout also clearly became radicalized over time. Although he did lead early protests with Fadwa Suleiman (a famous Alawi actress), he can be seen in this video (Homs, March 2012) perched up top of a platform energizing the crowd and seemingly and enthusiastically supporting the hateful message from the orator on the mic, who talks about exterminating Alawis and kicking the Shia out (1:05 to 1:30).

In this video (May 2014), within the context of the brutal siege of Homs, Sarout directs a message to Jabhat al Nusra (Al Qaeda) and ISIS, calling them brothers in arms and telling them that once he gets out of Homs with his men, that they should unite in order to fight the Christians and take back the lands that the Shias and infidels supposedly took (1:26 to 1:43).

There is also, of course, the infamous pledge of allegiance he supposedly made to ISIS (Dec 2014) about 6 or so months after he was “evacuated” from Homs as a result of the negotiated deal with the government to end the siege. There is quite some controversy around this with folks on the anti-Assad side saying he never pledged, while folks on the pro-Assad side insisting that he did. The truth is likely somewhere in the middle on this one.

Sarout, on the other hand, denied that his group had any affiliation with ISIS or any other armed faction fighting in Syria in this video (Aug 2015).

So what’s going on? From what I can tell, Sarout did want to pledge allegiance to ISIS and did so, but to a person who wasn’t empowered by ISIS to accept his pledge in any formal way. Later on, because of issues and infighting amongst the group of fighters who wanted to pledge allegiance to ISIS, as well as where Sarout would be deployed if he joined ISIS, when the formal ISIS representatives came to accept his allegiance, he rebuffed them. I recommend reading / listening to his wide ranging interview in May 2016 (while exiled in Turkey) where he discusses the details (I’ve quoted a small piece of the interview below):

“Soon after you formed Fallaq Homs, you left it. Shortly after that, rumors started to circulate that you gave allegiance to the “dawlah” [Islamic State]. What are the origins of the rumors and what are they grounded on?

There is no smoke without fire. If there was no basis to these rumors no one would even bring up such an accusation. So I can confirm it does have a basis. Seven months after I left Fallaq Homs, I was in contact with a man called Abu Dawud from Eastern Homs from the Ahlul Sunnah wal Jama’a group. He had left this group and was searching for fighters to form a new splinter group that would eventually give allegiance to ISIS. I was one of those people looking for work. I was frustrated by seven months of no progress with my previous group trying to break the siege.

So what did you do with Abu Dawud?

We gathered some groups, including mine. They asked us when ISIS reaches this area will you be prepared to give allegiance? In all honesty, I was one of those willing to give allegiance because I wanted to work. So I told Abu Dawud and he automatically took it as allegiance. However it later became clear that it wasn’t a valid way of giving allegiance and [it was] nullified.”

Finally, there is no doubt that Sarout was close to extremist groups throughout his later phases. Whether because of true ideological conviction or the “exigencies of war”, the reality is that this part of his life surely taints his legacy as the “Songbird of the Revolution”.